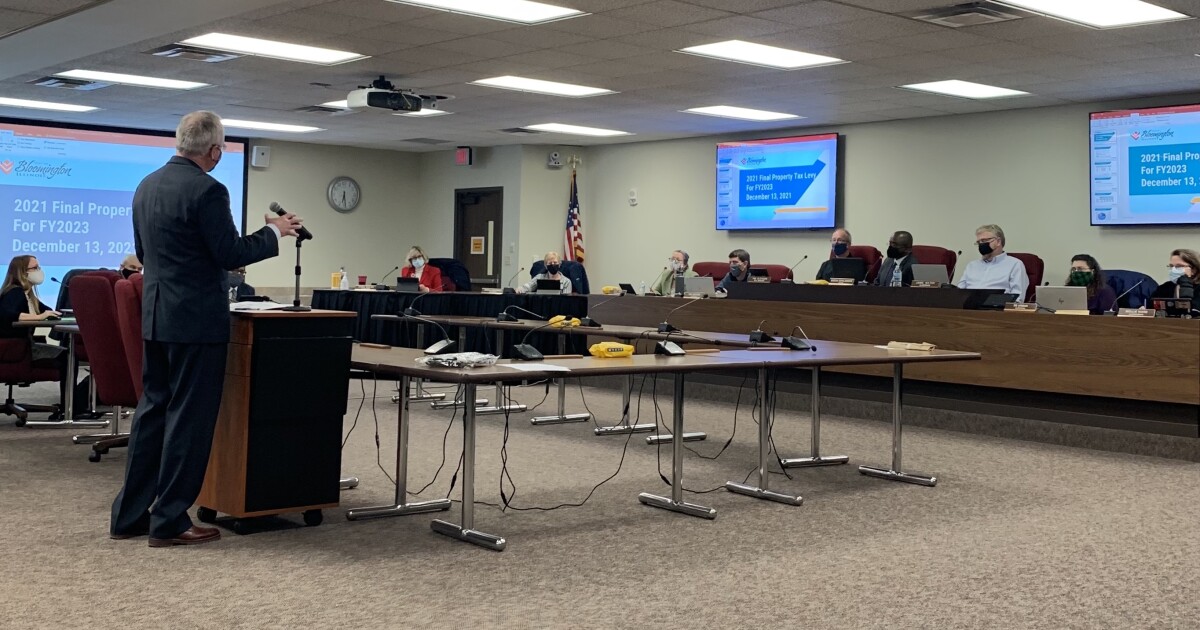 Bloomington Public Library’s $ 25 million expansion is moving forward – after the project secured major funding Monday night in the form of a tax levy and general bonds issued by the city.

However, the council unanimously approved the passage of the city’s property tax of almost $ 21 million. The combined tax levy of $ 26.8 million in 2021 estimates a tax rate of 1.39%, almost identical to the 1.36% rate last year, said Scott Rathbun, chief financial officer of Bloomington.

Also on Monday, the board voted in favor of a major legal deal with the nation’s opioid makers, which could net Bloomington around $ 500,000; and he heard an update on the city map related to the Americans With Disabilities Act.

The council has publicly discussed the combined property tax for more than a month, with the main focus being on the library tax.

The majority of Bloomington’s property taxes go to the School District in District 87. The town’s portion accounts for about 13 cents of every property tax dollar; and the library costs around 3 cents, Rathbun said.

The trio of board members who opposed the library tax said they would have preferred library officials to spend the entire recent $ 5.7 million state grant from BPL, obtained for the 205 E. Olive Street expansion project, to reduce the burden on taxpayers.

However, the majority of the board rallied behind BPL’s contributions to the project and its 50/50 share of the grant. Last week, library officials offered to reduce its tax levy to less than $ 6 million after receiving the grant. They also proposed reducing the amount the city would borrow from $ 17 million to $ 14.2 million.

BPL director Jeanne Hamilton told the board that unless the tax is passed, the library would not be eligible for the grant because it needs $ 15 million by July.

Library officials said the allocation of the grant allows them to make some project cuts made in July, for furniture and technology. With these changes, the project is now estimated at $ 25.2 million and is expected to be completed in August 2023.

The library plans to use around $ 4 million in reserves, plus $ 1.7 million in contributions from individual and corporate donors, for the project, said Rhonda Massie, BPL’s director of marketing, in November. The expansion has been years in the making.

Becker, Boelen and Montney have all said they support the library and its mission. The problem, Becker said, lies in using a tax increase to fund improvements. He called the BPL’s decision to take half of the grant and reinvest it in previous projects as “a slap in the face” for people who oppose the tax.

But Ward 8 council member Jeff Crabill countered that BPL, providing half of the state grant, had allowed general bond bonds to drop from $ 17 million to $ 14.2 million.

Crabill said the board should remember that there are many other people supporting these avenues of funding for the library’s long-planned expansion.

“Being good financial stewards means spending money in the right way that improves the lives of people in the community,” he said.

With the bonds, the city will pay about $ 850,000 per year. It’s a fraction of what the city spends on public safety, pensions, roads and other infrastructure, Crabill said.

Boelen said she was concerned about the lack of fundraising, saying it was best if the entire grant offset any tax increase. She said BPL only had $ 13,000 in project donations on the books as of Monday. Perhaps the granting of the grant would slow down the pace of government officials seeking donations, she said.

“We are resolutely determined to continue fundraising,” replied Julian Westerhout, chairman of the library board. In fact, he expects more success after this week’s vote, noting that many donors were reluctant to contribute without the tax being passed.

The library that wins the nearly $ 6 million grant represents an additional investment in this project – on behalf of the library, said Tom Crumpler, Ward 9 council member. is doing their part, ”he said.

Ward 1 council member Jamie Mathy said that while BPL should seek private contributions, the city does not need millions of dollars in donations to help with the budget for police or public works maintenance, for example.

Community space is expected to triple and new technological areas such as a manufacturing laboratory are planned. Another key part of the update will be entrances, walkways and other more accessible areas.

According to council documents, the major drug settlement is expected to bring in about $ 760 million in Illinois, with Bloomington receiving about $ 480,000 over the next two decades.

Bloomington executives plan to direct the expected $ 480,000 in drug settlement money towards efforts to reduce the impacts of the opioid epidemic, according to council documents.

By registering, the city agrees not to bring any future lawsuits against these manufacturers of opioid drugs. The board voted on the issue as part of its consent agenda, without discussion.

Michael Hurt, Bloomington’s Chief Diversity and Inclusion Officer, provided council with an update on the city’s transition plan related to the American with Disabilities Act.

In June, the board asked the administration to update a draft of the 2015 plan which never moved forward. The document deals with how the city will remove barriers related to disabilities, for equal employment opportunities; and how the city will provide equal access to city programs, activities and services.

Hurt said he expects to get community feedback on the new project by contacting community groups that work with people with disabilities and holding a public hearing in the next quarter.

In other cases, the board

Rockville is home to a new global pandemic prevention center