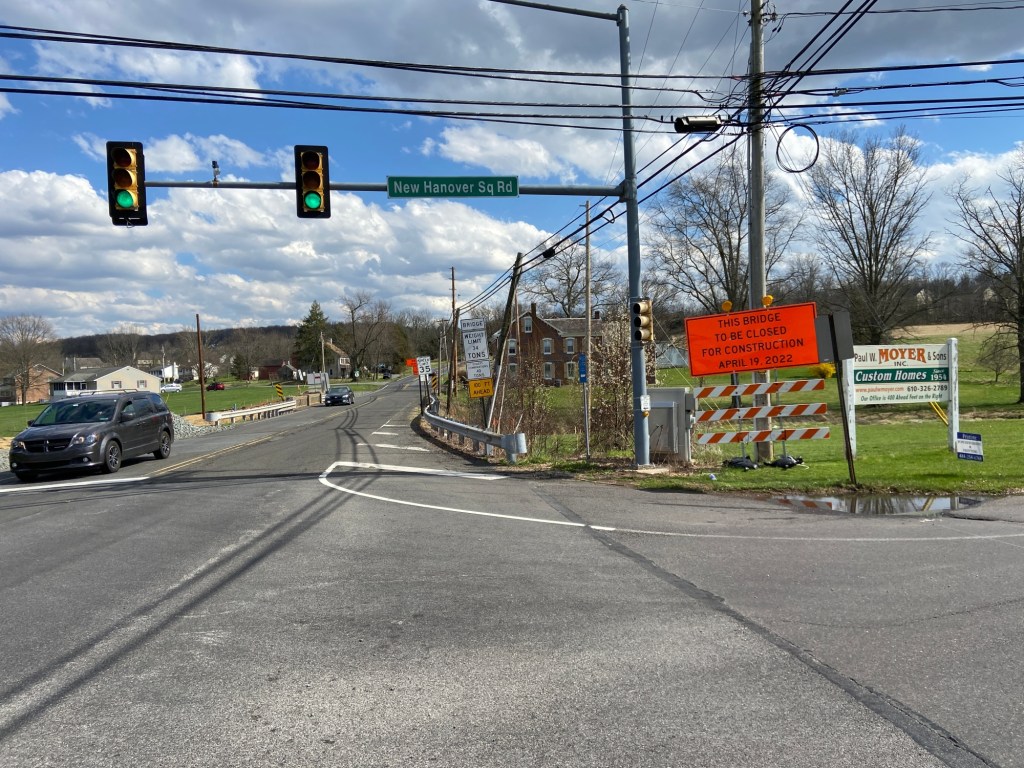 NEW HANOVER — A concerted effort by township and state officials, as well as residents, appears to have convinced Montgomery County to delay the start of the Swamp Pike Bridge replacement project by three months.

Township Manager Jamie Gwynn, who has been working for months behind the scenes to better coordinate four different bridge replacement projects to avoid all four being closed at the same time, posted the news on the town’s Facebook page.

The closure of Swamp Pike at New Hanover Square Road and the detour was due to begin on April 18. The county announced that it would not begin this project until July 1.

This will allow PennDOT to meet the scheduled June 30 completion date for the New Hanover Square Road Bridge that has been under construction since March 2021.

Gwynn released details about the issue and how PennDOT, which is in charge of two of the projects, had agreed to adjust its schedule to address the township’s concerns. Gwynn also posted the phone number for the County Highways and Bridges Department and urged residents to call as well to push for change.

In an April 13 letter to commissioners, the Boyertown School Board and Superintendent MaryBeth Torchia added school district clout to the push by raising concerns about the impact the four simultaneous closures could have on bus routes. school and student travel times.

“With the shortage of bus drivers, we had to be very creative in routing the buses. Many of our drivers do double trips, which has resulted in longer bus journeys and increased numbers of parents driving their children to school. The closure of the bridge on Swamp Pike will impact 12 of our buses. This area already has a bridge that has come out and our routes had to be adjusted as a result of this construction. Adding an additional project while another is still in progress will only complicate matters in this area,” school officials wrote.

“Students in the Boyertown Area School District have seen their lives, the lives of their families, and the lives of teachers and staff affected by an ongoing pandemic and the regulations imposed to combat this health issue. It wasn’t their fault or that of the Montgomery County officials. However, this adverse effect on their health and well-being can be resolved,” school officials wrote. “This negative effect is completely avoidable by imposing a three-month delay until the completion of the project already underway.”

Earlier this week, Montgomery County Commissioner Joe Gale began to question why the county’s Swamp Pike project couldn’t be delayed to reduce the risk to residents and expressed support for the delay. Gwynn then wrote directly to the other two county commissioners – Chair Val Arkoosh and Vice Chair Ken Lawrence, asking them to get involved.

Collectively, it all seems to have had the intended effect. A meeting was held between county and township officials on Thursday morning and a compromise was reached.

This was confirmed on Friday by Kelly Cofrancisco, director of communications for Montgomery County, who wrote “due to community concerns, the county will delay the start of the Bridge 166 project.”

But it will be expensive.

The penalty Montgomery County taxpayers will have to pay contractors for the delay will be between $325,000 and $500,000, according to Cofrancisco.

But Gwynn said it was a cost that could have been avoided had the county acted sooner.

“The county issued its ‘notice of lawsuit’ to its contractor on April 6, five days after its officials offered no concrete timeline for the start of the project during a meeting with PennDOT and the township. This meeting came seven months after the township first attempted to secure a meeting with county officials to alert them to emergency management issues that would arise with the simultaneous closure of four bridges; the meeting only took place after an intervention by Senator Bob Mensch,” Gwynn wrote Friday in response to a query from the MediaNews Group.

“It is certainly unfortunate for the ratepayers, but the additional cost the county claims to have to pay the contractor for the delay is only the result of their lack of communication and reluctance to meet with the township throughout the process. planning process. If the county had taken the township’s request seriously seven months ago, then perhaps our ratepayers would not be able to pay for their avoidable mistake,” Gwynn wrote.

“Anyway, we thank the county for choosing to do the right thing in the 11th hour. It’s a choice that, even if it saves a life, will be worth the once-avoidable extra expense.

And it may not all go smoothly either. The county issued several other warnings.

“The county will request that work begin July 1, 2022, as requested by the Township of New Hanover. This would be the requested start date whether or not the PennDOT project (on the New Hanover Square Road Bridge) is complete. The possibility of four projects in New Hanover Township occurring at the same time with concurrent road closures remains a possibility later this year, even if work is delayed until July 1, 2022,” Cofrancisco warned.

“In addition to cost, impacts may include an indefinite delay in repairs (of the Swamp Pike Bridge) and the need to renew contract work, depending on contractor availability. It is also possible that the county may have to put this project on hold until additional funds become available through the county budget,” she wrote.

He thanked the residents for their participation. He thanked State Rep. Tracy Pennycuick, R-147th Dist., and Senator Mensch for helping bring PennDOT to the table. He thanked school officials for speaking up and he thanked The Mercury for going public with the issue.

Know the consequences of CI-121