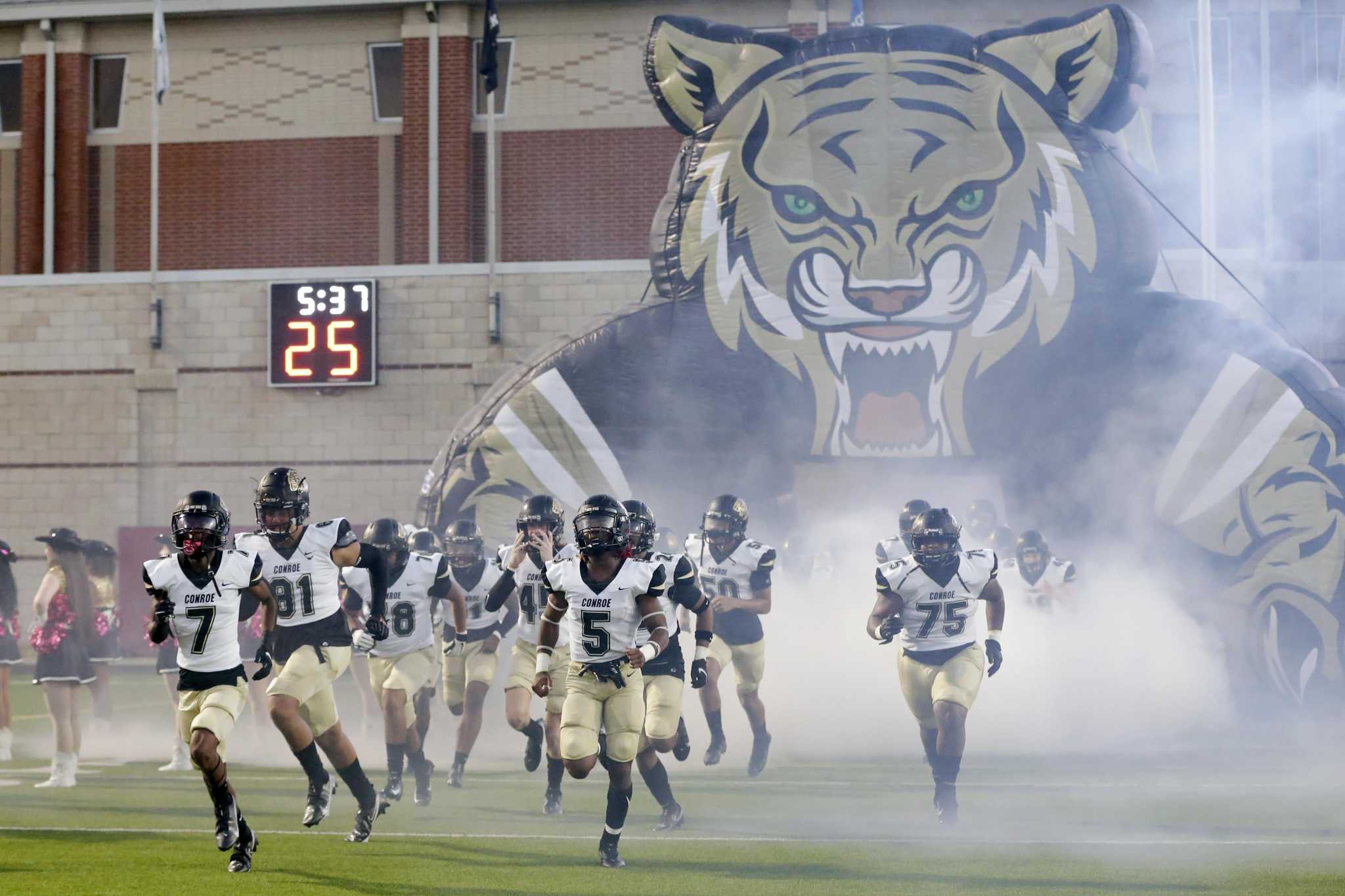 College Park (7-2, 3-3): The game everyone has been waiting for at Conroe ISD has finally arrived with the District 13-6A title and the playoff implications in play. The Cavaliers won the district title last season and with a win this time around, they would share the district title with The Woodlands, which won last week. Last week College Park edged Oak Ridge to a 14-10 victory. The College Park offense is led by Ty Buckmon who is 121 of 185 throws for 1,759 yards with 17 touchdowns and five interceptions for the Cavaliers’ offense. The College Park defense leads the district all season with 19 sacks and 47 tackles for a loss.

The Woods (7-2, 4-0): The Woodlands control their own destiny to win an outright District 13-6A title. One victory and the Highlanders will be crowned district champions to end the season and prepare for the playoffs. The Woodlands are coming off a 45-32 District game against Conroe. Second-year quarterback Mabrey Mettauer has improved in every game this season and is 131 of 199 for 2,029 yards with 22 touchdowns and four interceptions.

Grand Chênes (6-3, 1-3): Grand Oaks ended their three-game losing streak in the District 13-6A by beating Willis 35-21 last week. With a win and a loss for Willis to Conroe, Grand Oaks will make the playoffs for the first time in its history. A Willis win gives the Wildkats the final playoff spot, regardless of the outcome of that game. Junior running back Brandon High leads the Grand Oaks offense with 122 carries for 968 yards and 14 touchdowns this season.

Oak Ridge (1-8, 0-1): Oak Ridge won’t make the playoffs this season, but are looking to end the 2021 season on a high note. The War Eagles have lost eight in a row and have also lost four district games in a row. Oak Ridge visited the area last season. The War Eagles are led by running back Larry DeBose who has 134 carries for 994 yards with three touchdowns.

Conroé (4-5, 2-2): Conroe fell to The Woodlands 45-32 for his second straight loss last Friday night. The Tigers enter the week tied for third in District 13-6A and clinched a playoff berth with a head-to-head win over Grand Oaks. Clayton Garlock continues to be the top passer in the district with 2,679 yards and 23 touchdowns. Wide receiver Louis Williams III passed the 1,000-yard mark last week.

Willis (5-4, 2-2): A win for Willis will clinch last playoff spot in the district. The Wildkats failed that offer last week with a 35-21 loss to Grand Oaks. A Grand Oaks victory over Oak Ridge combined with a Willis loss creates a tie for fourth place and Grand Oaks would advance to the playoffs with the head-to-head victory. Willis appears to be rebounding after returning the ball four times in the second half last week against the Grizzlies.

New Caney (7-2, 5-2): Travis Reeve has New Caney in the playoffs for the seventh straight season. The Eagles will now look to play for the playoffs. Last week, the Eagles lost a 31-24 decision to Magnolia West. Running back Kedrick Reescano has 20 rushing points this season and leads District 8-5A (Div. I) in this category.

Magnolia (6-3, 5-2): Magnolia is coming off her second shutout district victory of the season as the Bulldogs handed Porter a 42-0 loss last Saturday. The Bulldogs are led by running back Hunter Andrews, who has 93 carries for 580 yards and eight touchdowns for the Bulldogs this season. Senior quarterback Ross Choate is 90 of 166 throws for 1,206 yards with eight touchdowns and six interceptions.

Magnolia West (9-0, 7-0): The big District 8-5A (Div. I) title game is finally here. The battle of the undefeated will take place at Mustang Stadium as Magnolia West hosts the second university station in town. Ben McGehee did wonders in his debut season at Magnolia West, but will now play one of the toughest teams in Texas. Magnolia West is led by Hunter Bilbo, who has 134 carries for 1,174 yards with 17 touchdowns for the Mustangs. Tye Copeland leads the district with four interceptions.

College Station (9-0, 7-0): College Station has been in business all season and outscored opponents 498-44. The Cougars are led by quarterback Jett Huff who is 128 of 169 for 1,908 yards with 31 touchdowns and three interceptions. Huff’s favorite target is Traylen Suel who has 43 receptions for 589 yards with ten touchdowns.

Cleveland (2-7, 1-6): The Indians have lost six straight District 8-5A (Div. I) games. Their last victory came from Waller in week three. Cleveland has been limited to 16 points or less in all six games with two shutouts. The Indians are allowing 35.9 points per game this season.

Caney Creek (1-8, 0-7): The Panthers are looking to end the season on a high note with the home game against the Indians. Caney Creek fell to Lufkin 38-14 last week, smashing back-to-back shutouts against New Caney and College Station for consecutive weeks. Caleb Besaw had 10 receptions, 122 yards and one touchdown against Lufkin.

Lake stream (5-4, 1-4): The Lions wrap up the season against their rivals in crosstown on Friday night. The Lions are 1-2 against the Bears. Lake Creek is also coming off a week off. His last outing was a 40-28 loss to Huntsville. Week 11 marks the first Friday game for the Lions since Week 6.

Montgomery (9-0, 5-0): Montgomery grabbed a share of the District 10-5 (Div. II) title last week and will take it straight away with a victory over the Lions in the MoTown Showdown. The Bears would still be the seed with a head-to-head victory over A&M Consolidated earlier in the season, no matter what. Brock Bolfing threw three touchdowns for the third time this season. It has 15 passing marks in total over the year.

LCM (7-2, 3-1): The Bears have been rejuvenated this year under coach Eric Peevey, who led Beaumont Westbrook to the state title game in Class 6A a few years ago. LCM missed the playoffs last year with a 1-7 record, shattering a four-season playoff streak. Running back Da’Marion Morris has a record 14 rushing runs and 1,031 yards.

Splendor (4-5, 0-4): The Wildcats end the year looking for a win over LCM and their first win of the year in District 10-4A (Div. I). Splendora was injured by injuries and has lost four straight games with a combined score of 155-48.

Preparation of the inheritance to Rosehill Christian

Preparation of the inheritance (1-6, 1-2): The Lions have a good chance of ending the regular game on a high note. The Lions are currently tied for third place in TAPPS District 4 (Div. III) with Northland Christian (who defeated Legacy Prep on October 8).

Rosehill Christian (1-7, 0-3): The Eagles have lost six straight games and were shut out in four of them. Rosehill’s last victory came on September 10 against Lutheran North, 24-17. Rosehill has scored 65 points (8.1 per game) this season.

Allen Academy (4-4, 1-2): The Rams have taken three of four wins and, according to MaxPreps, played Brooks Collegiate Academy two weeks in a row. Allen Academy lost to District Chief Emery / Weiner three weeks ago. The Rams played football in 2020 but did not compete in the District with the Cougars.

Alliance (7-1, 2-1): The Cougars scored a season high in points last Friday in a 76-53 win over Austin Royals Homeschool. Jackson Rudy shone as a quarterback in this competition with five touchdown passes. In defense, Callaghan Mitchell had 13 tackles and one interception.

Cooper (7-2, 6-0): How can we forget the last time Cooper and Cistercian met? Back in Week 4, the lights went out before the game at Pugh Field, the game moved to TWCA and the Dragons caught fire in the second half to beat the Eagles. Cooper is back in the SPC 3A title game for the third time in four years (the game did not take place in 2020) and is looking for his first championship in school history.

Cistercian (5-4, 2-0): Cistercian has gone 3-1 since the loss to John Cooper. His other loss in the SPC game came against Trinity Valley. Cistercian was tied with Fort Worth Country Day for second place and advanced to the title game with a head-to-head victory. Cistercian last won an SPC championship in 2005.