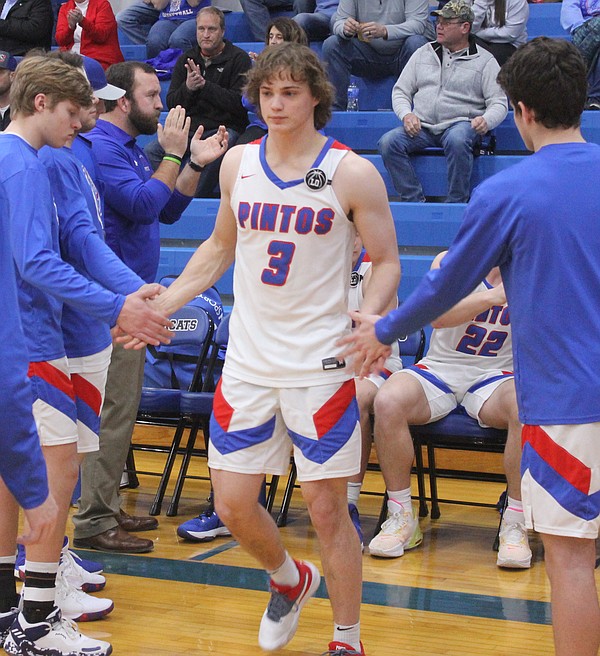 Last week, the California Pintos hit the road to compete in their third tournament of the season at the Hermann Invitational.

California had already finished second at the Tri-County Conference tournament in December before finishing third two weeks ago at the California tournament. Now they were in Hermann looking to clinch first place after beating Montgomery County 46-40

After beating Wright City 66-25 to open the tournament on Tuesday, California faced the Wildcats in the semifinals. It was not an effective game for the Pintos, but thanks to strong runs to finish the third and fourth quarters, California prevailed to advance to the championship game against the Hermann Bearcats.

California and Montgomery County had never played before Thursday’s semifinal. The Pintos knew the Wildcats were a team that liked to take time on offense to force their opponents into trying to win a relatively low-scoring game.

Pintos coach Brad Conway credited Montgomery County for giving his team a tough game, but he knew his team didn’t play well and was lucky to get the win. The coach and players know they need to play better with the playoffs starting in a few weeks.

“They fired the ball, they asked the kids to step in and knock down shots,” Conway said. “Kids who hadn’t shot the ball very well. They also kept very, very strong. They move very well without the ball. They executed, but they didn’t score. We had to work for everything what we had.

The Wildcats quickly put the Pintos to the test, hitting three of their first four 3-point attempts to take a 9-2 lead. But California did not panic. With help from seniors Trevor Myers and Calen Kruger, California tied the game at 13-12 at the end of the first quarter.

California was now forced to play Montgomery County basketball and the extra effort on defense was starting to show its effects. The second quarter got off to a rocky start for the Pintos when Kruger missed two free throws on California’s first possession. But the Wildcats had their own issues with the Pintos’ stubborn defense. Although Montgomery County made two more 3-pointers in the second quarter, the defense continued to take the reins from California and the game headed into the half tied at 21.

Heading into the second half, California looked for a fresh start on offense, while trying to hold their ground on defense. The game continued to be played at the pace of Montgomery County and the score continued to be below the taste of California. With just under two minutes left in the quarter, the Wildcats had a four-point lead and it looked like the Pintos would once again trail as the quarter ended. But California would rewrite the script by closing with a 7-0 run and claiming a 34-31 lead in the fourth quarter.

Late in the fourth quarter, with the Pintos leading 39-37, Montgomery County scored a big blow when senior guard Logan Hutcheson immediately hit a three-pointer to give the Wildcats a one-point lead. On California’s next possession, junior forward Jaden Traschel was fouled and earned a trip to the free throw line. The Pintos’ free throw struggles continued when the Traschels missed both attempts. But seemingly out of nowhere, sophomore guard Ayden Bryant smashed the backcourt glass to get the rebound and made an uncontested layup to give the Pintos a one-point lead.

Montgomery County came back looking to regain the lead and used as much time on the clock as they could while looking for a clean look at the basket. The look was an attempt at driving and lay-up. But waiting at the rim for California was junior/center forward Hunter Berendzen, who had been ill for three weeks. Berendzen tried to take over and got the call. Berendzen had struggled on offense in the game, shooting just 2 of 8 from the field for four points. But he had forced a critical turnover and that helped California hold on to the lead.

Kruger then hit two free throws on the ensuing possession to give California a 43-40 lead with 54.9 seconds left. But the Wildcats still had a chance to tie the game. They brought the clock back to 31 seconds when Kruger again made the big play by stealing a backcourt pass. Kruger was fouled and made two more free throws to give California a five-point lead. Byrant made another safe free throw in the closing seconds to seal the win. California again finished a quarter on a 7-0 run and beat Montgomery County 46-40 to earn the spot in Saturday’s tournament title game against Hermann.

Kruger had a game-high 15 points and four rebounds. Trevor Myers finished with 14 points, eight rebounds, two blocks and a steal, while Traschel had eight points, five rebounds, a steal and a block. California shot just 43 percent from the field and a minimum of 50 percent from the foul line (6 of 12). But held Montgomery County to 33% shooting and won on rebounds 31-21.

After defeating Montgomery County, the Pintos fell 53-44 to Hermann in the title game. The game was tied at 36 heading into the fourth quarter until Hermann’s defense helped them pull away from California.

California (17-3) has just four games remaining in the regular season. Their only game this week is Thursday night at home against the Sweet Springs Greyhounds (12-8).


Junior forward Hunter Berendzen starts at Central California in his second game after being out for several weeks with illness.

Senior forward Trevor Myers sets off to run after getting a rebound for the Pintos. Myers scored 14 points for 7-13 from the field against Montgomery County.

Pintos head coach Brad Conway talks to his team before the start of the fourth quarter against Montgomery County.

Junior forward Jaden Traschel comes up and past Montgomery County defenseman and converts a layup to open the fourth quarter for California. Traschel had nine runs, four runs and a steal on Thursday night.

Senior forward Calen Kruger shoots and makes two critical free throws after being stolen in the final minute of the game against the Wildcats. Kruger went 5-8 from the foul line in the game and scored a game-high 15 points.