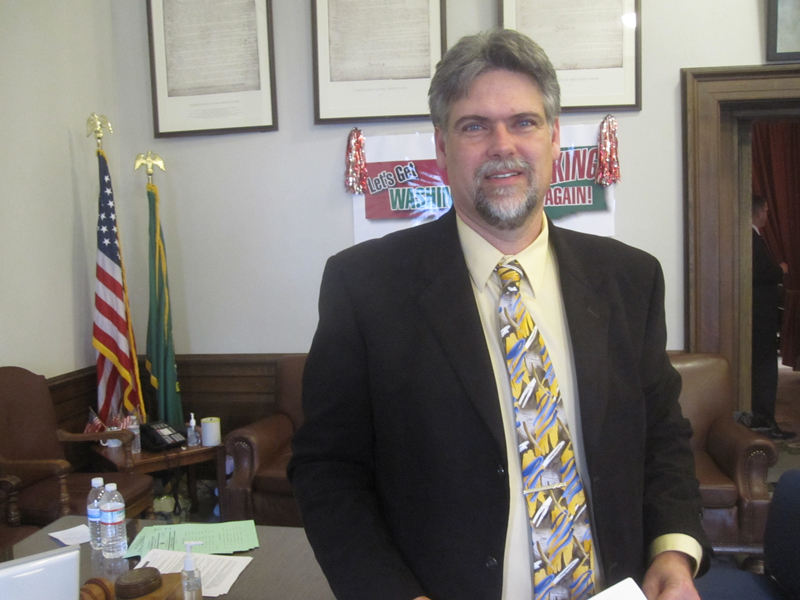 Representative Ed Orcutt represents Washington’s 20th legislative district. He is also a member of the rank minority on the House of Representatives Finance Committee. Orcutt is concerned about taxes, the impacts of police reform bills that were passed in the 2021 session, and supports calls for a convening of a special session This year.

The Washington State Wire spoke to him about these questions for this Q&A.

The Morning Wire: Keeping you up to date with Washington State politics, politics and personalities.

Aaron Kunkler: One of the hot issues that people are talking about right now is the WA Cares Fund. The public long-term care fund, to which Washington residents contribute at a rate of 58 cents per $ 100 earned, is expected to begin collecting payroll taxes in January. You have expressed concerns about the bill, what are they?

Representative Ed Orcutt: As you know, I opposed this bill when it was passed in 2019. I am concerned about the government’s intrusion into what should really be the private sector. People have to decide for themselves whether or not to purchase long term care insurance. I don’t think that’s something they should be enforcing, and I don’t think they should automatically take it out of people’s checks.

It’s also of concern that if you want to exercise your option to go for a private policy, you need to get state approval to do so, opt out, and not be taxed. It is very worrying. One of the other concerns I have is that there are people who are later in their careers, and they have to pay for a number of years. But what if they retire before that, all the money they put in, they don’t get any benefit? It’s really bogus security, because the amount they say seems like a lot of money, but when you start getting long term care it doesn’t last very long.

AK: What potential legislative fixes or adjustments would you like to see?

OE: Well, I’m going to sit down and talk with our manager about it and see what kind of things we can do. But I’m really worried that once that’s implemented, the majority could increase the amount of withholding from people’s paychecks and just raise taxes that way. What kind of protections are there for the citizens who are mandated to contribute to this obligation and if they will be able to derive any benefit from it?

AK: As a leading minority member of the finance committee, what do you think?

OE: I am really concerned about the Capital Gains Tax that was passed last year, despite the fact that we have huge amounts of income coming up in our income forecast. If you look at what happened to our budget over a three-year period, we went from a budget of $ 44.4 billion to $ 58.9 billion over a three-year period. It is a huge increase. We certainly didn’t need to add taxes to get there. I’m concerned about the impact this will have on those who are currently doing business in our state, and certainly those who otherwise sought to do business in our state, who are no longer seeking to relocate to Washington. These are good companies with high paying jobs that pay taxes and benefits and companies we should be encouraging to get in. But unfortunately, when you do something like that, you discourage people from investing in our state. You know, with the amount of money we got, we really should have done more for property tax relief.

AK: What legislation would you like to see in the 2022 session to deal with taxes in Washington state?

OE: One thing we could do is just reduce the amount of the levy. If we just reduced this overall amount [of property taxes], then it would be a gap between the assessed valuation and the state. We will now be offering property tax relief to a much larger group of individuals and employers than we have seen in the past. We have done some things for the elderly and the disabled, we have done some things for the low income, but we have not done anything for the middle income. We have very small business owners, and this is something we could do that would really help small businesses, as well as middle class taxpayers.

AK: There has been a lot of talk about police laws (here and here) regarding acceptable use of force tactics and equipment that were adopted in the last session. There have been calls from the Republican leadership to hold a special session to change them. What are your thoughts on this?

OE: I am really concerned about the restrictions that have been placed on our police officers. First, it is more difficult for them to apprehend suspects and to do so in a non-lethal manner. We need to make sure that we look after our officers and keep them safe, and make sure they have the safest means possible to apprehend suspects. And I think some of the bills that have been passed this year have taken away some of the non-lethal tools that they had, and it’s very difficult for them to do that. As a result, some suspects flee. This means that criminals who would have been taken off the streets are still on the streets, [were given] short sentences and let people out of jail earlier.

OE: I just want to work with some of my colleagues, fix the problems and make these bills work so that the officers can do their job, and their job is to protect and serve. Right now we’re making it harder for them to protect the game. We need to go back and look at these bills and figure out what needs to be done to address excess force, but not remove the tools that actually help prevent the use of greater force.

AK: Do you think a special session is likely this year?

OE: I think it’s really going to depend on the public and the public’s concerns about things like the policing bill and the long-term care act. What type of tax? Are they concerned about taxing their paychecks? Are they concerned about protecting their property? Are they worried about whether or not the police can step in and apprehend a suspect and get the criminals off the streets? I think if people realize some of the real dangers that exist, when they see what the real dangers are, I hope they will voice those concerns to their officials and to the governor. I know my constituents have told me they are concerned about the impact these bills will have on police services – I should call them anti-police bills – on their safety, the safety of the police. their families and the security of their property.

This interview has been edited for length and clarity.

Public service journalism is more important today than ever. If you get anything from our coverage, please consider donating to support our work. Thanks for reading our tips.